Why do we place more weight on negatives outcome than we do positive ones?

In our context of lifting; If an individual’s 1RM is 100kg and they do 110kg (+10%) it is often met with such comments as “it’s good but, I expected more” or “I watched the video back and I think I could have done more”

There is very often this wave of dissatisfaction, no matter the positive. Now in the context of sport and bettering ourselves I get it, we’re competitive and that’s what strives us forward to be better but, there still needs to be an understanding of what one has achieved, in and of itself and in the context of the competition itself.

The same person doing 90kg (-10%) will very often be rather distraught. Of course no one aims to do less but the physical swing in either direction is the same: +/-10% however, the emotional swing is far greater.

That same person will talk of themselves & think in a negative mindset for some time, to varying degrees but if we generalise here I’m sure you can relate to this. The haunting feeling of failure hanging over you for much longer than the joyous celebration does on the other end of the spectrum.

Here’s an illustration of emotions in that scenario

I had a bit of an epiphany this past weekend. I thought quite a lot about what would happen if I didn’t achieve the lifts I wanted. Well, nothing. I’d still be the same person after and I would still have the same opportunities in the futre.

Would my peers care? No
Would social media care? No
Would I care? Yes but, would that mean that the training in the lead up to it was wasteful? Absolutely not.

Here’s an illustration of that mindset 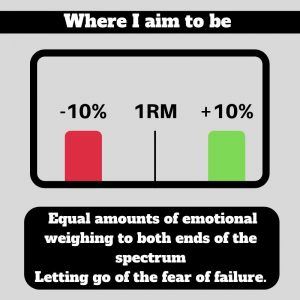 There’s more to it than “pick up, put down” or rather, competing & testing itself is not the end.

The training is a process, you’ll learn about yourself, challenge yourself & you’ll grow as you go through that process. This, for me at least, helped remove some of the fear anxiety, the fear of failure because I realised that if I do fail. Little has changed

What started out as me exploring ways we can think about & then let go of failure became more about how the focus on the process is what enables us to forego the failure woes.

Ultimately it’s almost natural for us to always want more and never be satisfied. We never pause and appreciate the process. Even though the process is arguably all that we have.

Busting Through The Mental Barrierhome_blog